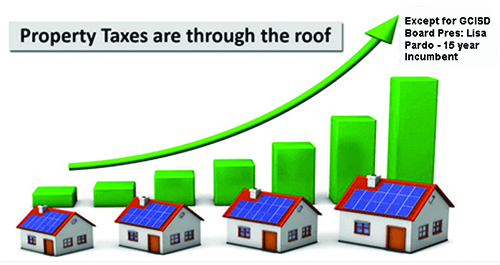 Lisa Pardo and her personal tax breaks from the burden of SCHOOL TAXES and More.

As an appointed member of Colleyville’s Charter Committee, the group appointed by Mayor Richard Newton and Chaired by former City Councilman and nationally known Colleyville Attorney Frank Carroll, the committee overwhelming supported the concept of Term Limits for city council positions.  When the voters had the opportunity to vote on the question, the decision was 80+% voted for the limits.

The committee members took to heart that Term Limits were needed at all levels of government, including draining the Washington DC swamp all the way to local elections.
However, the school Board did not follow suit be introducing term limits as well.  Your City of Colleyville felt that term limits was a method to allow other qualified citizens the opportunity to serve.

How much does the GCISD Board President Lisa Pardo make annually? Well this year $61,100 in TAX SAVINGS!  Do we really need to re-elect this 15 year incumbent, while your school property taxes continue to climb with higher evaluations, Pardo has just the special touch to drop her home value by $61,000, WHILE NO ONE ELSE IN HER NEIGHBORHOOD EVALUATIONS WENT DOWN!    Oh she will claim she just did what any taxpayer should do; higher someone to bring down her taxes (snicker inserted here).

While folks are paying higher and higher school taxes, you now my smell the GCISD swamp;  where the GCISD School Board and it’s 15 year incumbent Lisa Pardo, President of the Board’s Service has never met a tax increase on the homeowners of GCISD, EXCEPT when it comes to her own home!

When respected State Representative took a look at the savings GCISD Board President Lisa Pardo had knocked off of her home evaluation, he wrote twitter noted: #funnybusiness!

Amazingly NO OTHER homeowner received a $61,000 break on their School Taxes  EXCEPT Lisa Pardo, 15 years on the GCISD School Board.

While school Boards are twisting the arms of State Representatives, such as the local State Rep; Giovanni Capriglione; fight to keep the ISDs out of the voter’s hand to prevent the higher and higher taxes approved by School Boards to have a citizens’ veto, your local  Board President apparently doesn’t feel the same pain as the rest of her neighbors.  In fact NO OTHER home in her neighborhood received a reduction of their valuation EXCEPT Lisa Pardo, Board President!

“Lisa Pardo, president of the Grapevine-Colleyville ISD school board, is running in her first contested election in 15 years.She’s having a bit of a rough time, though, through no fault of her own.

Last month, when a property owner asked her to take down one of her signs because of sign clutter, her husband Paul volunteered. When he returned, he told her he also removed a sign for a City Council candidate.Uh-oh. That set off a mini-crisis. A few called on her to resign from the board. Protesters carried signs to a school board meeting. “No pardon for Pardo,” one sign said.

Pardo apologized and explained her husband’s intentions were innocent.”

If you believe the husband of a 15 year politician did not understand the appearance and, yes even the law, of not pilfering political signs; is not appropriate, then we must have a real problem in educational matters at the Pardo household.

But yet there is more.  Pardo claims now that she used professionals to plead her need to reduce the value on her personal home, while everyone else in the neighborhood just have to grin a bear their increased home values, thus increase in Taxes.

There is clearly a relationship between the Pardo and Sullins attempt for another term, with the attempt to dislodge 3 effective councilmembers, who will be serving their last term because of Colleyville’s term limit written into the City Charter.

If you don’t believe there is a push from the “Progressive group running for City Council, Skinner, Bullock and Steinkamp,” then you aren’t paying attention and you really should.

If  you like politicians that find a way to profit from their “service,” then you will be eager to keep the Pardo and Sullins duo in office.  We have a commercial realtor running for mayor against Richard Newton, progressive voting Bullock, until he runs in a conservative city and another, Steinkamp who thinks Colleyville should be more like Chicago; or apparently more like your current GCISD Board President.