Posted By: Editor - Nelson Thibodeauxon: July 25, 2016In: Letters to the Editor
Print Email

Take a look at the attached files and let me know if you think it would be newsworthy enough to put on LNO.
L.R. Watson 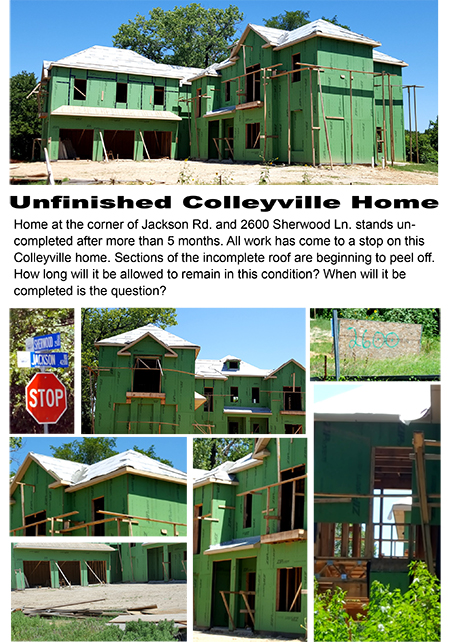 Response from the City of Colleyville’s City Manager Jennifer Fadden;

The home under construction at 2600 Sherwood Lane received a building permit on February 25 that will expire on August 25. Building permits expire 180 days from the last building inspection. Eddie Wilson, Building Official, visited the site on Friday, July 22, and noted two site violations: 1) High grass and weeds need to be mowed 2) Stagnant water in the drop shower must be removed and the window opening covered Mr. Wilson attempted to contact the building company owners (Bella Vita Custom Homes), but has received no response to date. Mr. Wilson also contacted the owner of the property, who had spoken with the builder and was told that construction would begin again “in the next week or so.” Mr. Wilson advised the property owner of the City’s immediate expectations which are to abate the nuisances before the scheduled re-inspection on Tuesday, July 26. Additionally, Mr. Wilson explained that the home construction must commence soon and advised him to develop a contingency plan in the event that the builder does not continue construction. As previously stated, the building permit is valid until 8/25/2016. Based on his conversation with the property owner, Mr. Wilson believes that the owners are interested in completion of the project and there does not appear to be any intent on their part to abandon the project. City staff will continue to monitor the property to ensure compliance with all applicable City codes.
Share 0
Tweet
Share
Share